As we learned, it’s hard to make progress during winter with less daylight, colder weather and overall less energy to spare. However, we did manage to make some progress over the past few months.

We continued for as long as we could to burn and oil the siding but doing this in beginning of November didn’t really work. The colder temperatures made the process take a lot longer and the rainfalls during fall and winter made the boards even hard to char. 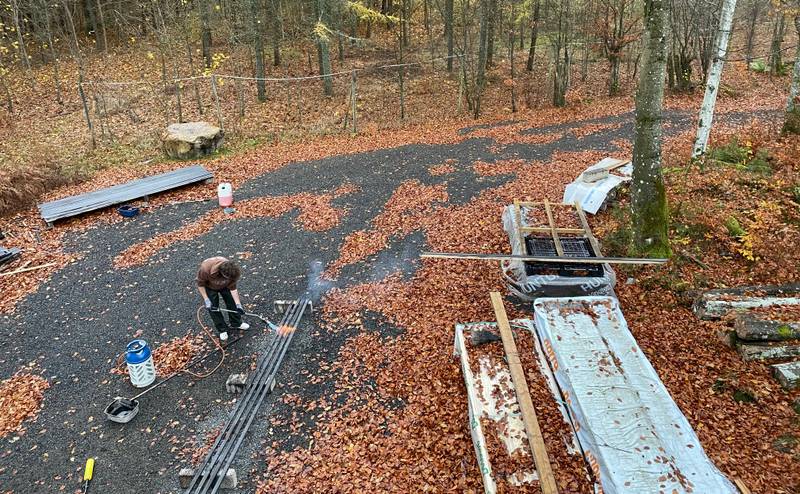 It’s a big difference trying the burn the sidings during this colder climate and the raw linseed oil pretty much never dries.

While burning and oiling the siding has been really slow we went ahead and put up the boards that we did finish. They were not completely dry (and never would have been until next summer) so it was a bit messy getting them up. Our hope was that they’d dry faster once up on the walls.

A few weeks later when we arrived at the cabin we saw roughly 20 birds sitting on the east gable facade. We didn’t think much of it at the time but later in the day we noticed that the boards on that side was significantly lighter in color. When we looked closer we understood the birds had been feeding on the not yet dried raw linseed oil and in the process also shipped away part of the charred surface. 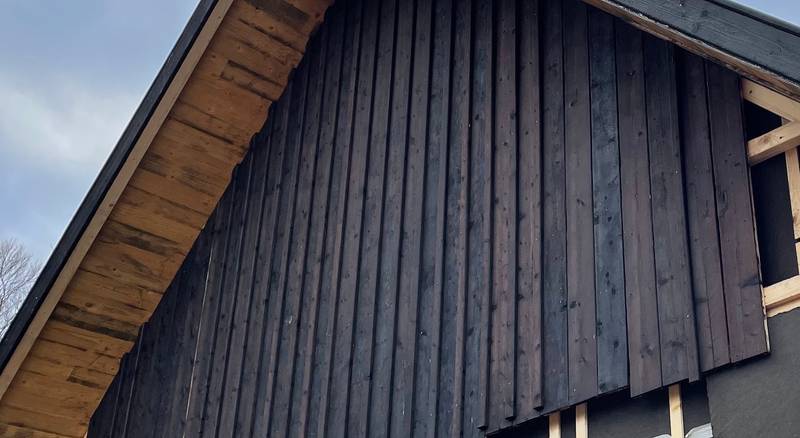 The lighter boards were those that had not fully dried when we put them up and the birds had, in trying to get to the raw linseed oil, chipped away some of the charred surface.

It’s one of those lessons learned that is hard to read up on before it happens. We could’ve guessed the birds would like the raw linseed oil but not while drying on black charred boards. Our carpenter also told us a story about birds liking the old style window putty (containing linseed oil) and if applying that at certain time of year, the birds would eat it away.

We had both sides finally covered with the first layer of roof last fall but during winter we got help putting on the final layer of tar paper on the roof. 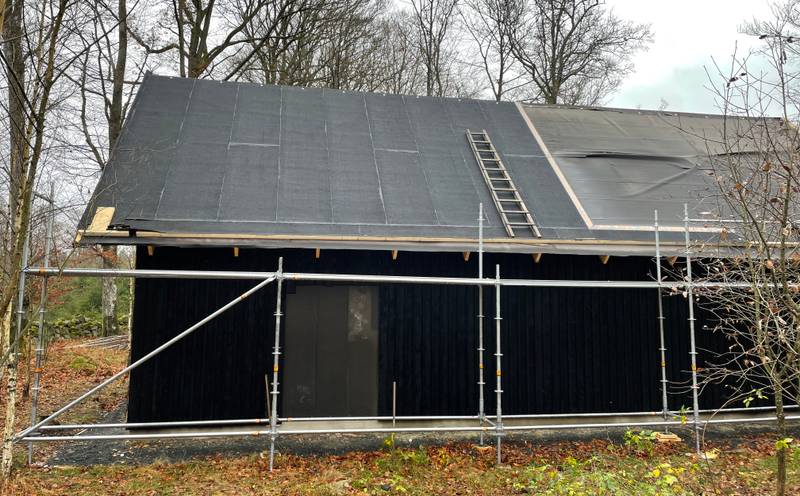 The final layer of roof is being applied. You can also see we opted for not doing traditional gutters instead there will be a ridge on the roof sloping towards the west where we’ll drain the rain water into a water tank for watering our garden. 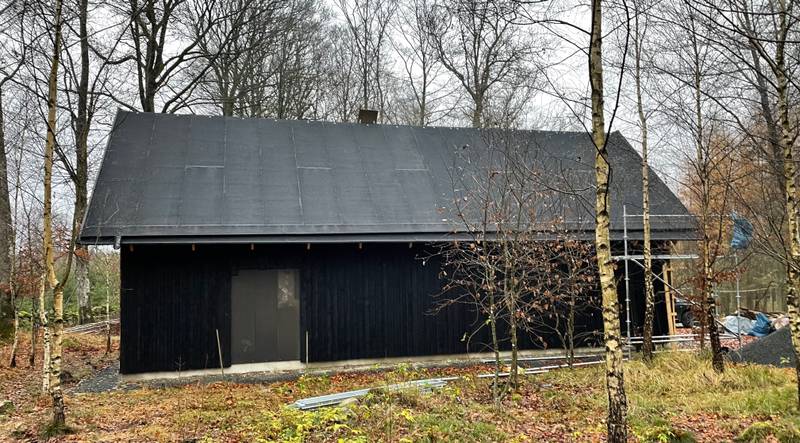 The southern roof all done. On the bottom left of the image you can see where the rain water will be drained off the roof and where we’ll collect rainwater from.

About 2 years ago we took down 2 larger trees and in summer of 2020 we bought a Panther sawmill and cut slabs from the beech tree. We only cut up one log back then and we’ve been meaning to get time to do the rest but building a house takes up most of our spare time.

Either way, beech is not the type of tree you should leave laying outside for a long time since it’s not rot resistant and is likely to be affected på fungi growth. This phenomenon is often referred to as spalting. It could be a really cool affect but if it has gone to far, it will ruin the wood.

So, it was pretty exciting cut slabs from the second log of beech and we really didn’t know what to expect. Turns out we got lucky. The slabs we got were not ruined at all, had som spalting and had turned a slightly darker color. We’ll see how this evolves as we dry the slabs over the next year or so. 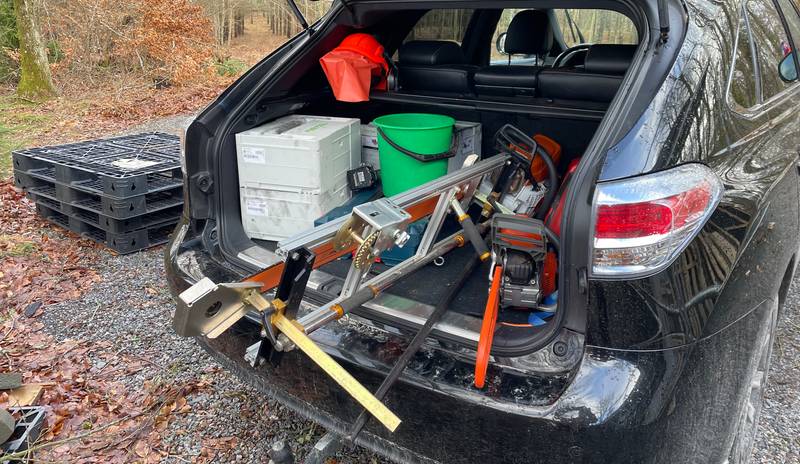 Packing the car for the 120m trip down to where the logs are. It beats carrying all this stuff by hand. 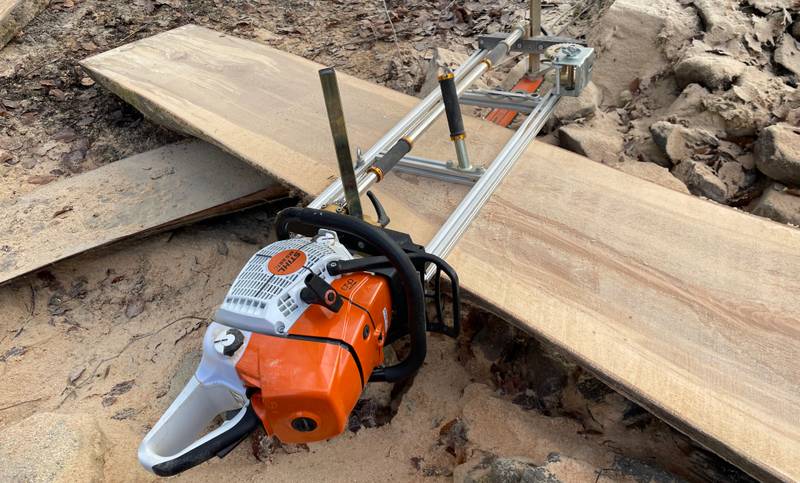 The Panther sawmill paired with the Stihl 661 90cc chainsaw is a powerful combination. 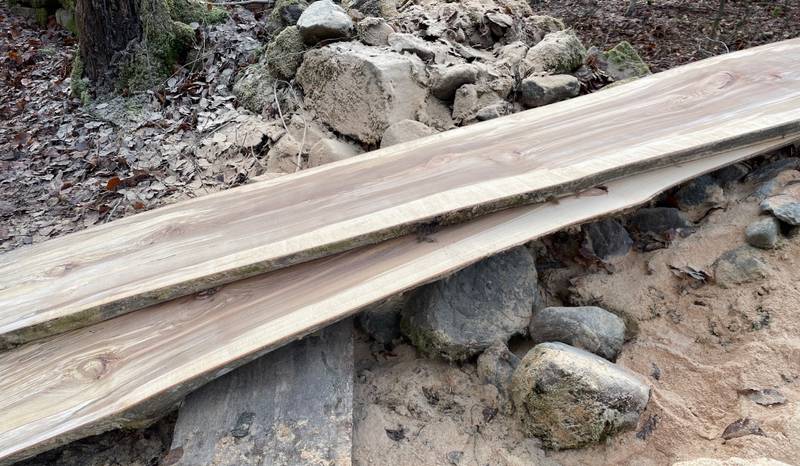 The spalting is not super apparent in this image but with the darkened center it almost looks like oak. 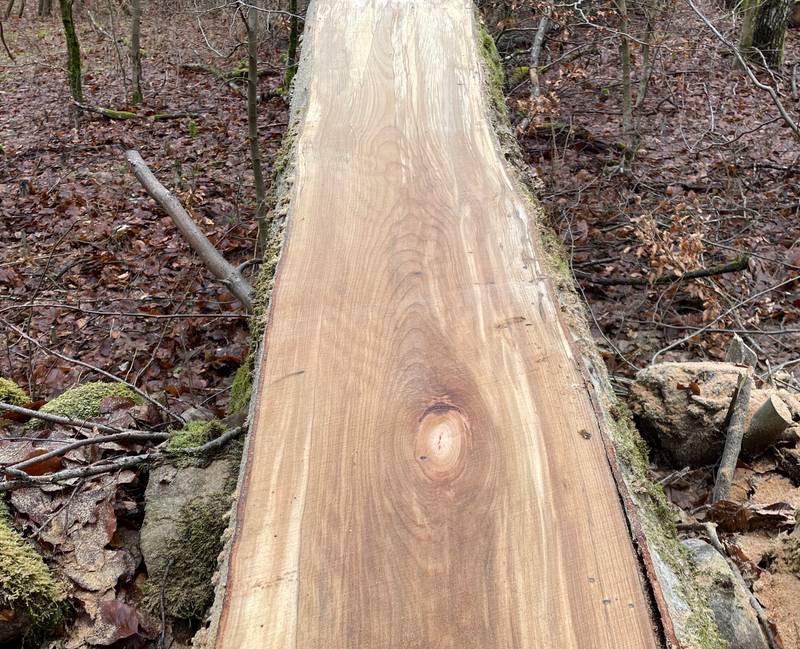 Here you can clearly see how much darker it is than regular (freshly?) cut beech. In the further end you can see some minor spalting. 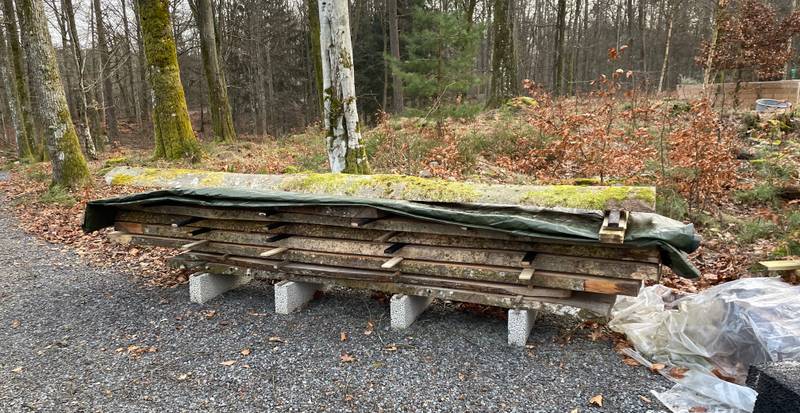 The new slabs stacked with a few of the older pieces we still have drying outside.

Apart from the above we’ve also spent time planning the insulation and interior walls and we’re aiming to do another easter working holiday. We’re going for a wood fiber insulation from the same manufacturer as the asphalt board we used as wind screening. The interior walls will be covered with horizontal tongue and groove wood planks but more about in the future.