Before the insulation can be put in place we need to level the entire foundation off with a more granular stone crush. The coarse 0-90mm would not be very suitable for placing the insulation on so we had 20m3 of 4-8mm stone crush delivered and got to work.

Geotextile under the 4-8mm stone crush

To separate the coarser layer with new 4-8mm the whole foundation was covered with geotextile made for foundations. In Sweden, where we build, this is a class N2 geotextile. The geotextile was laid down in sections as we couldn’t drive the excavator over it if we laid it all out at the same time. 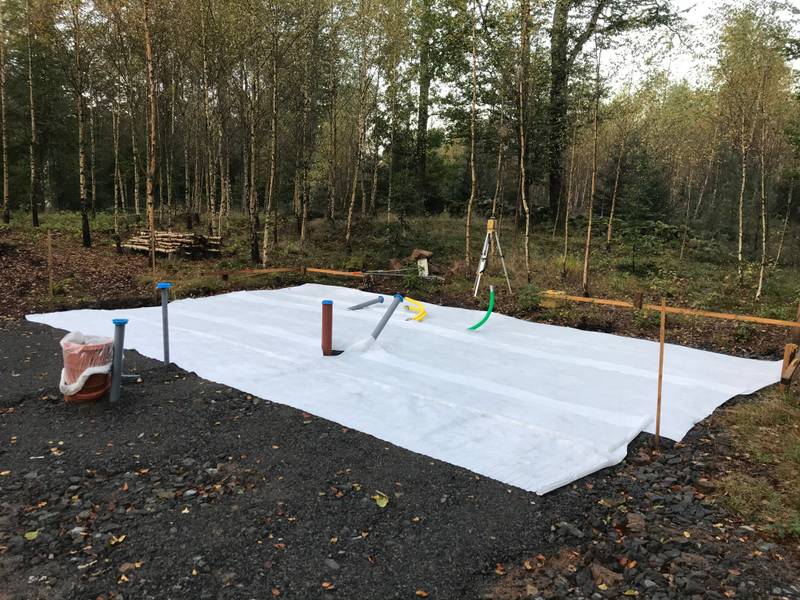 The white geotextile will let water through while keeping the stone crush layers separated.

Once the geotextile was in place we got to work with the first section. The final foundation level will 250mm over the 4-8mm stone crush. The excavator did a rough leveling and then we manually raked the gravel to get it to within the +/- 10mm of the level we needed to be at. It wasn’t very hard but took a but of time to get it all to the correct height. 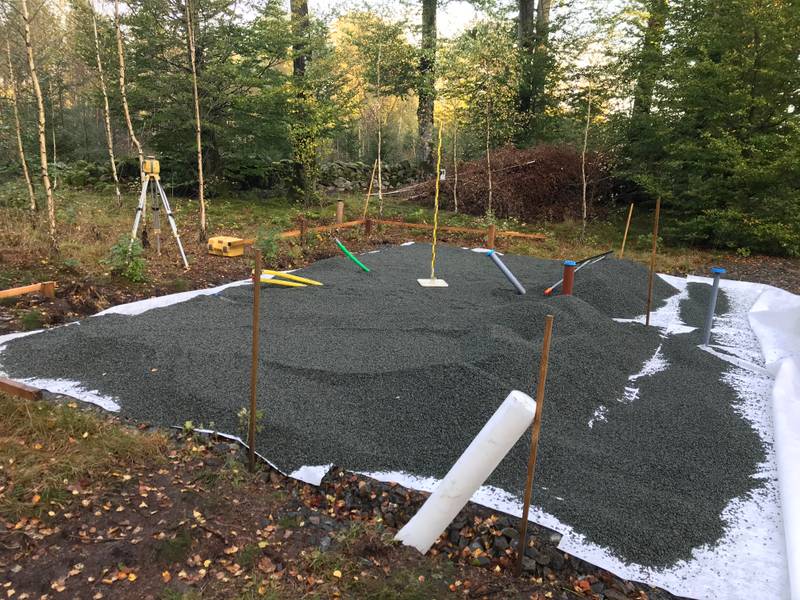 Getting the 4-8mm gravel to be level at the heigh we wanted to be wasn’t that hard but took a bit if fiddling, especially around pipes and near the edges. 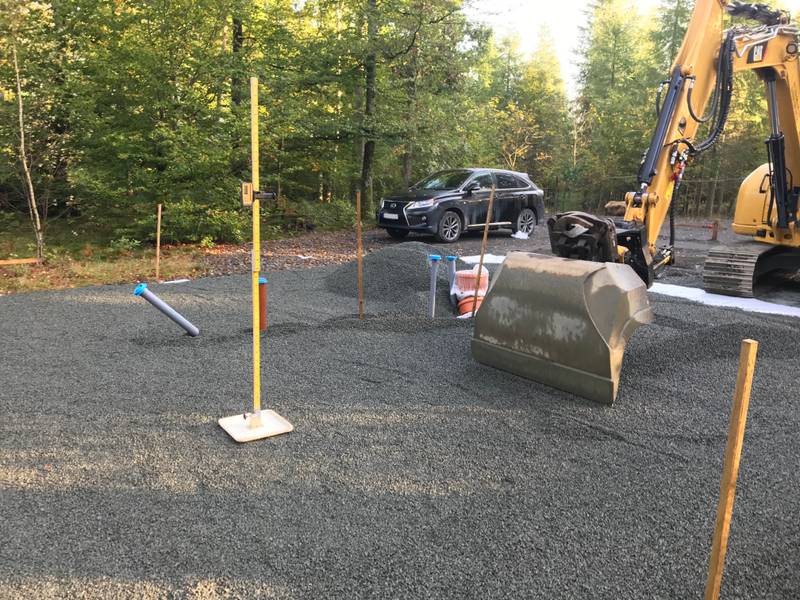 The excavator operator got to show off his excavator skills trying to get as close as possible to the level we needed to be before the manual raking begun. He was surprisingly close most of the time. 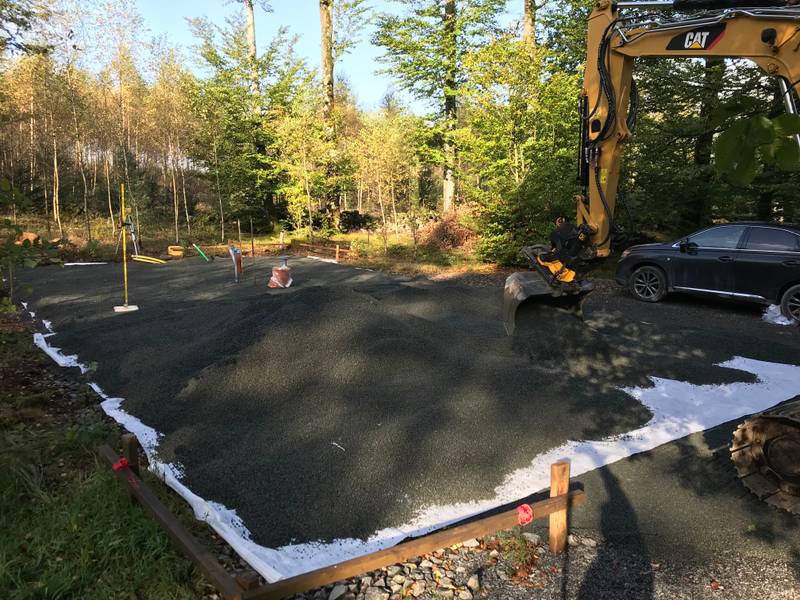 More gravel being pushed around to get the everything level and ready for the insulation.

It took us about 4 hours to get all the 4-8mm stone crush laid out on top of the geotextile and levelled off to +/-10mm of where we needed it to be. It would have been very painful without a proper rotational laser but thankfully we had one at hand. 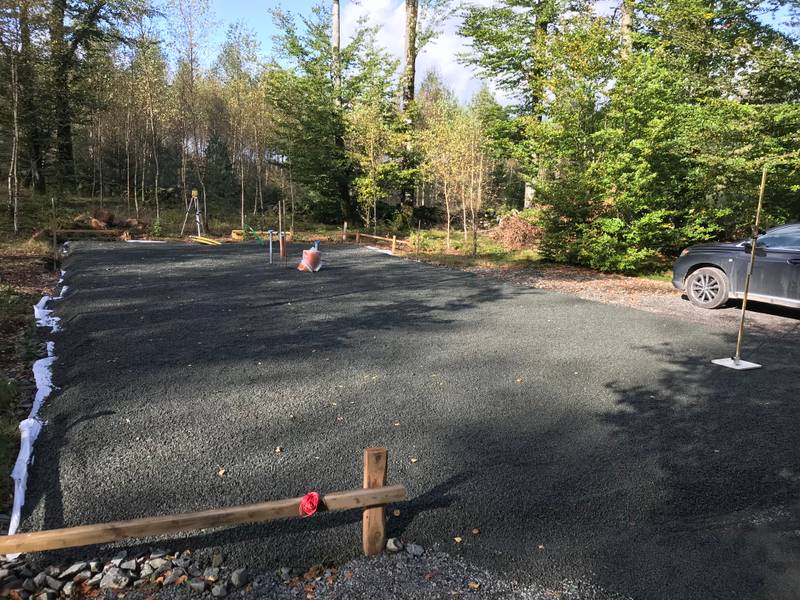 The whole foundation ready for the insulation. 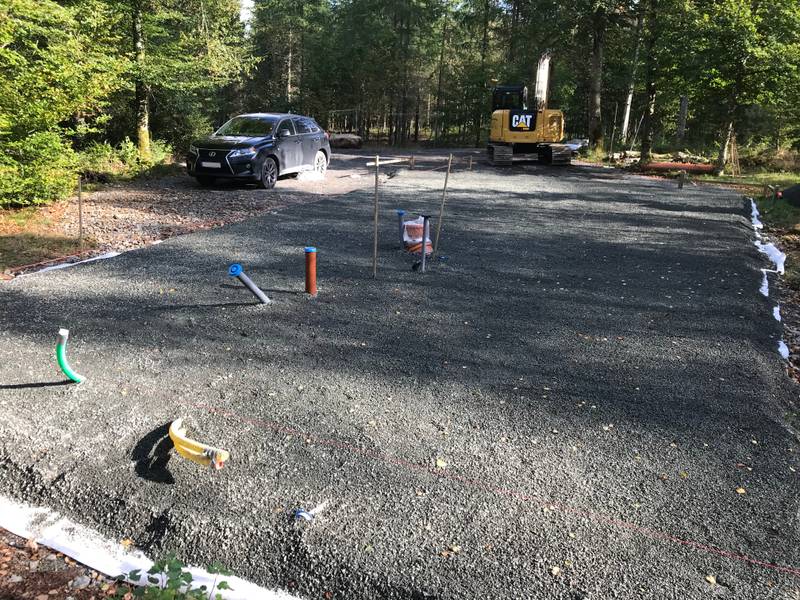 While everything was within the range when this photo was taken, just walking across the foundation moves the gravel so much that we’ll have to do some tweaking before the insulation is put in place.

After a well deserved lunch we got another visit from the contractor who’s helping is with all the plumbing and water lines. Since the insulation will not be the standard plastic insulation but instead a foam glass insulation it was decided to put all cold water lines within the 4-8mm gravel. There’s about 100-150mm of finer gravel on top of the geotextile so plenty of room for cold water. The hot water lines will be placed within the insulation just under the floor heating at a later stage.

We also did some final adjustments of the sewer pipes, floor drains and toilet main sewer pipe, which was a little bit off bit was easily fixed by Johannes. 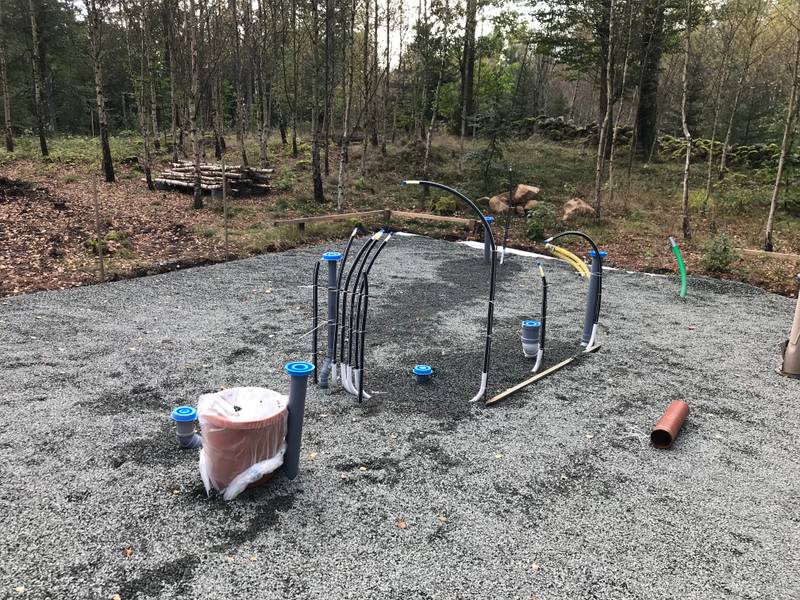 The water technical room with the mother pipe sticking up on the left side of this image. The grouped water lines is where the main water connection box will be inside the wall between the technical room and the bathroom. 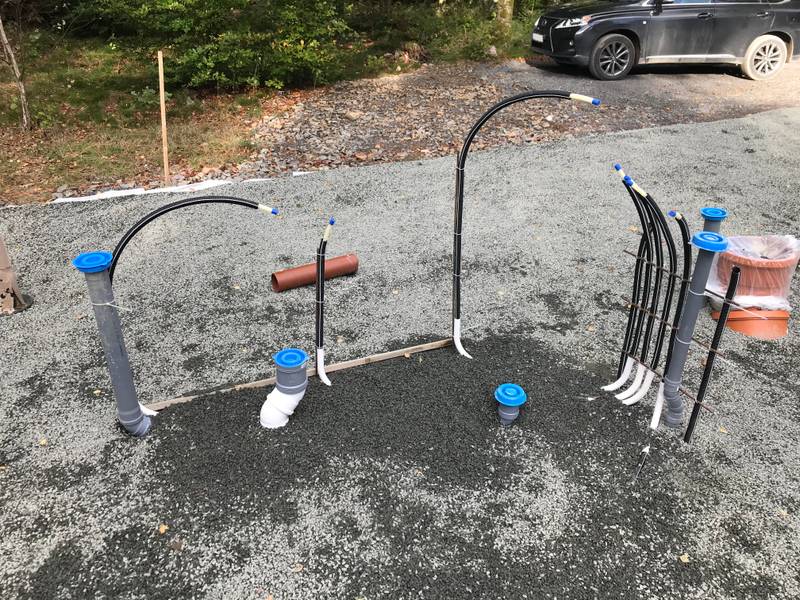 All sewer and cold water lines within the bathroom. From the left, sink, toilet and shower drain. The thinner black pipes are cold water.

We’re on the final stretch of getting the foundation done. In about 2 weeks we’ll put all foam glass insulation in place, followed by the in-floor heating system and finally pouring the slab later that week.