When we designed the workshop roof, its slope was decided based on what we were planning to do on the house. Since we’ll be doing a green roof on the house it needed to be max 27° slope to stop any greenery from sliding off the roof. So, to have a clear connection between the two buildings we had decided to make the roof slope the same.

The original roof slope of the workshop.

While the 27° sloped roof on the workshop gave us a generous inner ceiling height of almost 4.5m, the workshop exterior didn’t look all that great. At first we thought a high inner ceiling was more important than a pretty exterior but after discussing this a length for a few weeks, measuring and looking at other workshops we decided to that a 3m inner ceiling would be enough.

More benefits of a steeper roof

With a steeper roof we’d get more space under the roof. While not full height the added space is almost 40m² and give us the option to either have a lot of storage, moving the office to the loft or even have lots of beds for guests staying the night.

Plenty of ceiling height in the workshop space plus the possibility of en extra loft.

So, after some careful considerations where pretty much the only downside to doing a steeper roof would be slightly higher material and labors costs, we decided to do a 45° roof on the workshop. Of course we discussed this change with all authorities to make sure this change was actually doable and ok to do, and it was, so we decided to go for it. 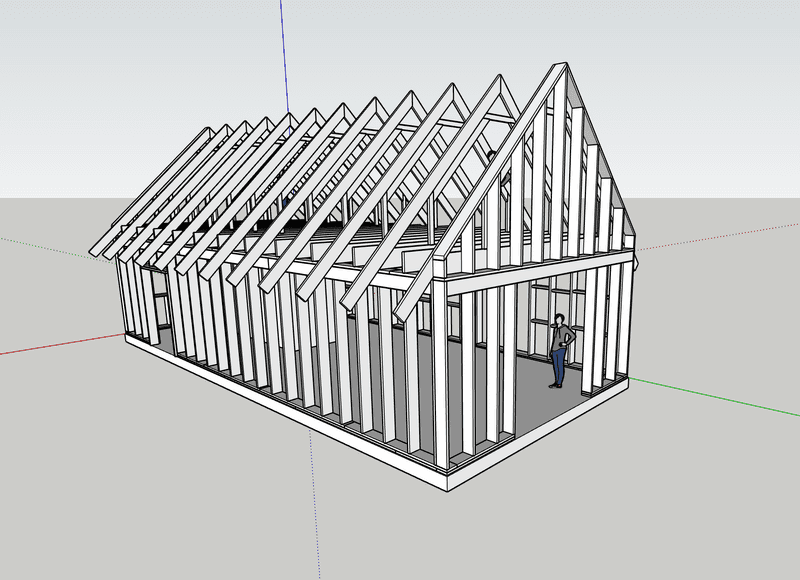 The frame of the workshop showing the roof rafters with proper dimensions.

Overall we’re confident this is the right decision. It’s better to save money on other things that we can change but change the roof sloop after the fact will never really happen. Next up we’ll order all lumber and rafters to raise the frame in the next few weeks.